MWS Family of the Month – the Rowe Family

MWS Family of the Month – The Rowe Family

From the very beginning, my pregnancy with Xander was filled with unexpected twists and turns! Cole, Zander’s older brother, was born with a unilateral cleft lip. So, from the onset of my pregnancy with Xander, I needed specialized prenatal care, which included additional ultrasounds. Before my 20-week ultrasound, we decided to have a “gender reveal” cake made for the special occasion. At that time, it was a new concept and the ultrasound techs had never even heard of it – but we had family coming into town the following week and thought it would be fun to find out the gender together. We asked the technicians to write down Xander’s gender on a slip of paper. Long story short – it was a teaching hospital and when we cut the cake the next week, it was pink!

Thankfully, we had an ultrasound scheduled the following week and we quickly learned that we were going to have a boy! From that point on, all the ultrasounds came back normal. There were no concerns about the pregnancy at all. Then, during a routine 35-week appointment, the midwife became concerned and called in a doctor. Xander’s in-utero heartbeat was 223 and fluid was beginning to build up on his heart and organs. The physician monitored me for a few hours and determined that Xander needed to be delivered as soon as possible. Unfortunately, the hospital did not have a NICU. Meanwhile, my husband, who is in the Air Force, was at an exercise in Las Vegas, NV. So, while I was still being monitored at the doctor’s office, he got on the first flight he could find back to San Francisco. During his flight, I was sent to a hospital with a NICU in Sacramento (the opposite direction of San Francisco from where we lived). Xander was delivered via emergency C-section while my husband was stuck in traffic on the Bay Bridge. 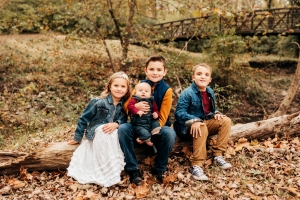 After delivery, Xander was rushed to the NICU, but the pediatric cardiologist had been called out to another hospital. Thankfully, it was only about a week or two after FaceTime was first introduced on the new iPhone. So, the cardiologist was able to watch the monitors and give instructions to the team at the hospital over FaceTime. He ensured that the nurses would administer the right dosage of medicine and successfully pull Xander out of his atrial fibrillation. According to other parents in the NICU, it was a chaotic mess of rushing doctors and nurses and the first time that FaceTime had ever been used in that hospital to save a patient.

Once Xander’s heart was back in rhythm a few hours after birth, we had no idea there was anything else abnormal about him. We spent 13 days in the NICU due to feeding problems because he was early. When Xander was discharged, we were instructed to follow-up with a cardiologist and that was the extent of our concerns. Several weeks later, I started noticing delays in areas that did not seem related to Xander’s stay in the NICU.

My first wake-up call came when Xander was about 3 months old. We were spending time with a friend who had a baby the same age as Xander. I remember being struck by how much her baby smiled, and how he was interacting with her. Xander would not make eye contact or track anything. He was a happy baby and smiled, but never seemed to respond directly to anyone, unless he heard a noise. We were immediately referred to an ophthalmologist. They diagnosed him with Delayed Visual Maturation and told me that his visions would improve when Xander was between 6 months. But when he was around 4.5 months I felt they were missing something. Even if he couldn’t see, I felt he should have been interacting more and playing with toys that involved sound, responding to voices, etc. We went back to his pediatrician and that’s when the doctor realized that something was indeed not adding up and the referrals to specialists began. We saw one doctor after another, over and over, and never got any answers. We were lucky in that Xander was very healthy, but I feel that may have delayed his diagnosis even further.

Finally, we saw a geneticist at the Oakland Children’s Hospital. Although he did not have answers for us, his report and the medical terminology that he used to describe Xander’s physical features provided me with the material that I needed to relentlessly Google for answers. After a week or so of scouring the internet and looking into different syndromes, I came across Mowat-Wilson Syndrome. At that time there was very little about it on the internet, but I decided to check Facebook. One of the Community pages showed a video of a little boy in England that was about 6 months older than Xander. I pushed play and I knew we had found our answer. To this day, I get goosebumps thinking of how I felt watching that video. I called over my older son (who was about 3.5 at the time) and he thought I was showing him a video of his brother. The boy in the video and Xander looked so similar, and all of their movements and gestures were identical.

I called the geneticist the next morning and requested testing to confirm that Xander did indeed have MWS. Our insurance company approved a micro-array, but that came back normal. So, it was another long battle with insurance to get a complete genome sequencing of the ZEB2 gene. During that battle, I decided to reach out to Dr. Mowat and Dr. Wilson. I sent pictures of Xander and a brief medical summary via email and was shocked when Dr. Wilson responded within 24 hours confirming that she was 98% sure Xander had MWS based on the information that I had provided. It was such a relief to hear from her that I wasn’t crazy! Our geneticist had made it seem that I was out of my mind because MWS was so rare! With that information, we moved forward on the assumption that we had found our answer and reached out to the MWS community. We were welcomed with open arms and it felt so nice to finally be understood.

Shortly after that, the genome sequencing was approved, but they wanted blood samples from myself and my husband as well. We had the blood draws done, but they mishandled the samples and my husband was deployed with the military for several months, so there was another delay. Finally, we were able to have the MWS diagnosis confirmed, and about two months later, we attended the first ever convention in Kansas City that summer and enjoyed meeting all the families and kids we had been following on the internet. I can’t explain the joy of meeting the families in Kansas City and truly fitting in somewhere.

Our new “normal” is difficult but beautiful

Xander is now 9 years old. There are most certainly hard times, but I feel like those first few years, when you are still holding out hope that maybe they’re wrong and you are constantly comparing your child to other children their age, those are the hardest times. I feel like those are the years where you really need this community more than ever, because it’s not as obvious and the gap is not yet wide enough that you don’t feel like maybe, just maybe, you can jump to the other side and have that “normal” life you always dreamed of.

Xander is a blessing. He has brought so many amazing people into our lives that we would have never met otherwise. He has taught us to love in ways we didn’t know we could. He has also taught acceptance and understanding to those around us.

This life is not easy, I won’t lie. I still wish we could do some of the things as a family that I had always dreamed about. In many ways, we do most things that other families do – we have all the gear from special needs strollers, to bike trailers, to hiking backpacks and we try to involve Xander in as many activities as we can and emmesh him in the community as much as possible. I feel like that not only helps us as a family but helps those around us see that although he is different and may face challenges, he truly brings joy and contributes to his community in ways others cannot.

I think that the best piece of advice I have for new families is to continue living life as fully as you can. Don’t shy away from crowds because you don’t want people to stare. Get out there and be proud of the amazing kids we have and the smiles and joy they bring to others. Xander can find the sweetest souls in a crowd. It never ceases to amaze me how people will come up to us out of the blue and just start interacting with him and being fully present in the moment with someone they have never met. I can tell you right now that none of my other three children have ever spontaneously pulled someone out of a crowd with such a genuine heart, like Xander does time and time again. 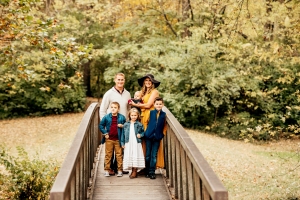 A Community of Hope and Faith

So, let me leave you with this: Our kids change our lives. There is no doubt about that. It is up to us to focus on the ways they change our lives for the better and try not to get bogged down in the hard parts of this life. Your kids, your family, and your community see how you approach life and they mimic your behaviors. So, lean on this community if you need support or you’re going through a rough patch, but try to put your best foot forward for the sake of your kids, because others will follow your lead in how you approach them and this life.

Save the Date for our 2021 Giving Day Fundraiser on Tuesday, November 30
Scroll to top