MWS Family of the Month – the Donlevy Family

MWS Family of the Month – The Donlevy Family

Chloe was born in September 2015. Her birth was uneventful, and she came home less 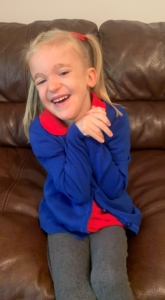 than 12 hours later. In hindsight, when Chloe was a newborn, there were a few issues that should have raised flags but nothing overly severe, so they were all brushed under the carpet so to speak. By the time Chloe was 6 months old, she received her first referral due to these issues and very apparent delayed development. This is when we really started our journey, and what a journey it’s been!

Our first real medical issues began at 6 months when Chloe was hospitalized for the first time with the flu. This became a common theme for the first 4 years of her life with unexpected hospital admissions due to the flu, RSV, seizures, minor illnesses and various infections. In addition to these hospital stays, we had many appointments with pediatricians, neurologists, gastroenterologists, ENT specialists, and respiratory specialists. In addition, Chloe required many procedures such a MRIs, x-rays, swallow & sleep studies, and ECG’s, as well as physical, OT and speech therapy. Our lives had changed drastically, but we became accustomed to our new “normal” very quickly.

When Chloe was 2, we were referred to a geneticist after her MRI showed a condition called Agenesis of the Corpus Callosum, which means that the middle section of her brain didn’t develop. We saw a lovely doctor who spotted the MWS features instantly. She pointed out things such as the shape of Chloe’s ears, which we eventually laughed about as we used to comment on them all the time while totally oblivious that it was a piece of her puzzle! 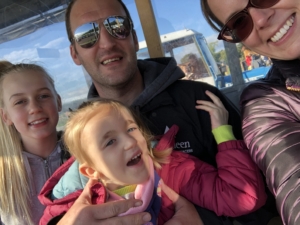 At that time, we joined the Mowat Wilson Syndrome support groups & learned about MWSF. There are no UK charities for MWS, so the work of the Foundation and the information they provide have been a great asset for us! We have virtually “met” so many families from across the globe and have been very lucky to meet some local families in person here in Scotland. We happily call them all friends. The MWS community is so special and has helped us through some of our toughest times.

Chloe is now 6 and totally thriving at life! Various surgeries and medications have led to fairly stable health for her the last few years, and for this, we are very thankful. Chloe started school this past summer. She attends special support/needs education alongside attending school in a mainstream classroom. Chloe adores both of her schools and is happiest when she is surrounded by other children! She is a total music addict – her favorites are Cocomelon & the Wiggles. Chloe would surround herself by books all day if she could – she is an expert at turning the pages. Developmentally, she is still very delayed – Chloe is not fully independently mobile, and she likely never will be. Chloe has never “babbled” like a baby, much less spoken. She can only eat puréed food and must be supplemented via her feeding tube, but she is a very knowing little girl who finds her own way to make her feelings known. A family member recently called her very bossy! This is actually very true and was music to my ears, as it showed how well Chloe gets her strong personality across despite having no words. There is so much more to communication than talking!

Chloe has a 12-year-old sister Aimee, who is her idol in many ways. Our daughters 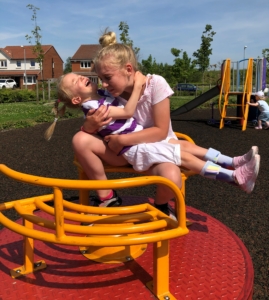 have an amazing bond, but at the end of the day, they are still siblings and can definitely annoy each other from time to time! It’s heart-warming to see them snuggled up together, but it secretly still makes me smile to see them bicker like typical kids! Aimee is the most incredible big sister. She is so patient and kind to Chloe and is always happy to pitch in with her care needs. We would really be lost without her!

There is no getting away from the fact that life can be tough at times, and life hasn’t turned out the way we envisaged it would for us as a family, but the years have brought a certain acceptance that has allowed us to focus on the positives – the main one being the sheer volume of love Chloe brings! Never have I ever experienced such a pure soul who wants nothing from anyone other than lots of cuddles and lots of clapping hands!

Mowat Wilson Syndrome turned our lives upside down, but in the end, we discovered we were the wrong way up anyway! Yes, in a heartbeat I would take all Chloe’s struggles away, but we cannot imagine our lives any other way now.