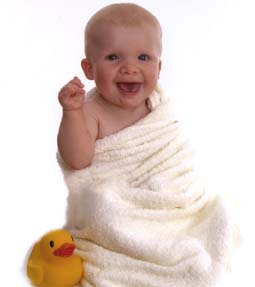 Aime was born on the 27th November 2005 weighing in at 3010kg (6lb 10 1/4ozs) at 14:19. My pregnancy with Aime was totally different to my first child’s. I didn’t gain half the weight, hardly felt Aime moving, even towards the end of the pregnancy and from 28wks I was put on red alert as I had had a show and the doctors didn’t know how long I would be able to continue carrying Aime. Also at my 20wk scan they found that Aime had Hydronephrosis of the kidneys. Thankfully Aime went full term and by the time she was born her right kidney was practically normal and the left had diminished in size. Unfortunately after Aime was born she wasn’t interested in being fed and after 6hrs going by and still not showing any signs of being hungry I ended up feeding her by syringe. This continued for the following 3 days until I went home. At Aime’s 24hr baby check they mentioned that she had a webbed neck and her nipples were spaced to far apart, so they were going to take some blood and do a chromosome test for Turner’s Syndrome. We were both given the all clear and sent home with Aime being put on Trimethoprin to help keep any urine infections at bay until she was able to have another renal scan.

The following 10 days my midwife came around to check on the both of us. Aime still wasn’t feeding great and had started to loose weight. She hardly ever slept and hardly ever cried. I showed my concerned to my midwife but was told not to worry, this was quite normal and everything should be fine. By three weeks old Aime was put fully onto bottles and finally starting gaining weight. We received her chromosome test for Turner’s syndrome back and were told it was negative, which was the best Christmas present we could have hoped for.

For the next 6mths everything seemed to be going okay. Aime gained weight very slowly had started on solids and was doing everything a baby should have been doing. She had another renal scan and a catheter inserted to see if there was any bladder reflux and thankfully everything came back okay.

By 9mths things started to change. Aime wasn’t rolling over and she couldn’t even support herself sitting unaided. I know my first daughter was quick in all her milestones and I knew every child was different but I still felt something was wrong. My health visitors didn’t seem too bothered so I took her to see my family chiropractor. It was the best thing we could have done. My chiropractor told me Aime’s spine was twisted in 2 places, and that was the reason she wasn’t able to sit very well as she was probably in a lot of pain. The chiropractor also advised us that we take Aime to our local doctor just to check her over, as neither of us could understand how Aime didn’t cry when she was obviously in so much pain. So after seeing our local doctor he referred Aime back to her kidney consultant with concerns of developmental delay. That’s where the games began. After seeing consultant after consultant we were finally told that there was a possibility that Aime had either Angelmans Syndrome or Retts Syndrome. So we did what most parents do these days and came home and started researching on the internet. After much reading both my husband and I thought that Aime was heading more towards Angelmans Syndrome but we wouldn’t be sure until we had seen a geneticist. It was at that appointment that the geneticist said he felt it was Mowat-Wilson Syndrome, but would send her bloods away to be tested for both syndromes as well as a chromosomal tip test.

Whilst all this was going on Aime had various other appointments to make sure everything else was okay. She passed her hearing tests to the best of the hospitals ability, and her eye tests, but her optometrist felt she was long sighted so we have another appointment next year to really see what is going on. Her kidneys seemed to be doing okay with no urine infections, so she was taken off of Trimethoprin and her general health and wellbeing was fine. Every test that had been run had come back normal. Then on the 30th June 2007 we finally got our diagnosis, Aime had Mowat-Wilson Syndrome. So now we knew for sure our little girl was different and we had a name for it. As far as we know the first test our geneticist tried came back normal but the second test showed that a spelling error was identified in her DNA known as ZFHX1B. We have yet to see the geneticist and talk to him about this as her results came through the post.

At present Aime can roll over from her back to her belly when she really wants to. She has been sitting unaided since she was 11mths. Can rock back and forth when put into the crawling position. Can shuffle backwards on her belly and occasionally go back into a sitting position, and Aime can stand when put against something like the couch. She has physiotherapy once a week along with chiropractic care weekly which really helps her movement and flexibility. Her physio gave her a pair of Pedro shoes which really help her keep her balance when she tries to stand and walk. She is also awaiting a standing frame and a special chair and table. The reason for this is because Aime tends to try and use her feet to touch and play with instead of her hands, so we are hoping by putting her at a table and chair which she feels secure in she will eventually use her hands more.

Aime also has a Portage worker come to the home once a week to help work with her on her developmental delay and to start preparing her for preschool.

Aime doesn’t speak any words but does babble mama and makes various other sounds with her mouth but with no context. She doesn’t sign but seems to understand when I sign and talk to her, more than she lets on I’m sure.

Feeding wise Aime is mainly on pureed foods and is only now starting to cope with small lumps. She can’t finger feed herself yet or hold her juice cup and is still on 3 bottles of formula a day no matter how much she eats, and I have to say she eats more than her 6yr old sister. Where she puts it I just don’t know. Her diet mainly consists of vegetables and high fibre foods as she has a huge problem going to the toilet. Everyday she has to have baked beans just to try and help keep her regular. She regularly drinks chamomile tea with drops of peppermint oil in and occasionally has the odd chamomilla tablet, which seems to help her with her wind build up and gripping pains that she gets in her belly. Aime doesn’t have any sugar or salt added to her food and she definitely doesn’t have too much chocolate or foods containing high amounts of E numbers or sugar. The reason for this is because we find it builds up more wind in her belly and it stops her sleeping. To help keep her bowel well lubricated she regular eats Quinoa (pronounced keen-wah) rice and on a daily basis takes omega 3 supplements with vitamins, extra vitamin C and acidophilus.

On the sleeping subject Aime is pretty good. She regularly has a 2hr nap through the day and is always asleep by 20:00. Throughout the night we generally just have to go into her and pop her dummy back in her mouth and she goes back to sleep, then from06:00 onwards she’ll awake. We do have melatonin in the cupboard incase things ever get that bad but thankfully we haven’t had to use it more than twice and both of those times were when she was ill with ear infections.

Activity wise Aime goes to sing and sign, Jo jingles and sensory play once a week, which she really enjoys. Once a month we all go to a local group called Oasis where parents with children who have additional needs can go and have a coffee, whilst the children play. Aime used to go swimming weekly but unfortunately we had to stop that due to her getting continuous ear infections. At present we are still awaiting a referral to the ENT specialist, a dietician, the speech and language therapist and she is also waiting to have a MRI done.

All in all Aime is an angel. She can be very demanding but always has a smile for the people she sees regularly. She loves rough and tumbles, is full of giggles when tickled and loves her older sister to bits. She can be very shy to new people and new environments but is getting more and more confident every day. She is also the most stubborn little girl I know which can make things very interesting throughout the day when things need to be done.

I often ask myself why me, why us but deep down I know Aime was given to us for a reason, and I’m sure it was for her to teach us and look at the world differently. I love Aime with all my heart and wouldn’t change her for the world. 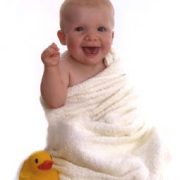