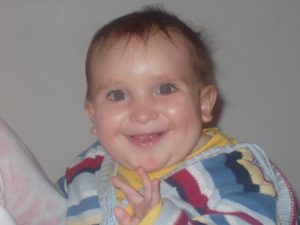 Our 16 month old son Alexander (born 10.12.04) was diagnosed with Mowat Wilson Syndrome on the 3 March, 2006. We had spent the last year trying to deal with severe eczema and multiple allergies (dairy, egg, soy, and multiple nut) which had led to his having been hospitalized with severe bloody diarrhea.

At birth we had thought our bouncing 10 pound baby boy was going to be another ‘big, tall strapping child’ like his 12 year old sister and 9 year old brother. But, from the start he looked a little different from the other two and my mother who died in Australia in January used to tell us that if we would only hold his ear lobes down when he was sitting on our knees, then they would soon settle into place!

At five and a half/six  months before all the bowel bleeding began, Alex seemed to be growing normally, but was a long way from being able to sit up. By 10 months when we had the bleeding and allergies under control through diet (his and mine as I am breast feeding him) we put his developmental delays down to the fact that he had been so ill. But, as more time went by it became increasingly clear that the allergies may have been a distraction masking a bigger ‘problem’. The allergies continue to be a continual focus as all Alexander can consume is rice, Neocate (a prescription only amino acid based formula) pear, chicken, lamb, potato, green beans and swede. After 8 months I’d kill for a bowel of pasta! But, I have lost 3 stone so every cloud has a silver lining! And more importantly Alex is now thriving! His eczema is very well controlled and he has not had any bloody diarrhea since we cleaned up his diet.

In October ‘05 Alexander entered the Early Intervention Services here in Ireland which meant he started regular physiotherapy sessions in a bid to ‘bring him on’. The endless round of seeing medical specialists was also underway – to date Alex has seen a multitude of consultants including, allergists (2), endocrinologist, gastroenterologist, developmental pediatrician, ophthalmologist, audiologist and finally a geneticist.

Since his diagnosis we have been assured that there will be good support for Alex – and this seems to be the case. As well as the physiotherapy, he is now receiving speech therapy and is wait listed for occupational therapy.

People have always commented on how ‘good’ Alex is. He has been to Australia to see my family three times and on the long haul flights there were always many comments about how quiet he was. I always felt that he was ‘too good’. I knew I should have had a squirming, inquisitive baby causing havoc at that stage!

At 16 months Alex looks like a baby of about 10 months and some of his development has been placed at that of a 6 month old. He was born into the 90th percentile and is now at the bottom of his percentiles for height, head circumference and weight.

Alex is the adored centre of our family and is a really smiley little guy,  with a belly chuckle that just lifts your day. He is also very ‘chatty’ and babbles constantly.  He puts his arms out when he wants to be picked up for a cuddle and has always communicated exactly what he wants with his eyes.

A couple of things which puzzled us from the start – and we are not sure whether this might be a form of epilepsy, is that Alex from the time he was a very small baby would stare at us unblinkingly for long periods (for example in his car seat) and also had really odd tremors like when you tickle a dog on the belly, in one limb or other.

Since the MW diagnosis Alex has started having various checks to see whether he has any of the medical conditions sometimes associated with this syndrome. Last week we got the good news that he is clear of Hirschsprung’s Disease. Next come checks for heart, brain and kidneys. I am hoping that as we have not had any major problems in these areas to date that he may have escaped some of the more severe conditions.

Our two older children absolutely adore Alex and shower him with hugs and kisses – he gets very excited when he sees them coming! At the weekend, Genevieve our 12 year old taught Alex how to ‘High Five’ which we are delighted with as it is the first time he has interacted with us in a ‘play’ sense.

We are very proud of his every achievement – Alex can now sit up well for long periods and he can stand (with a ‘catcher’ at hand) at a couch and play with his toys. His favorite toy is a xylophone which he loves to bang with the stick! But, he is showing no signs of wanting to crawl or pull himself up – let alone walk.

We can not imagine life without our beautiful little boy. He is an unending source of joy except maybe when he wants to play at 3am in the morning!

In the words of our big kids – we just think Alex rocks!!! 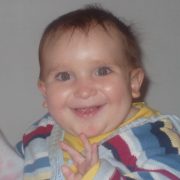