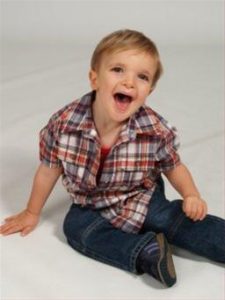 My pregnancy with Andrew started out normal. After 6 years of trying for a second child, our hopes had come true. At my 20 week sonogram they noticed his belly being distended so they sent me to a specialist. The specialist saw me several times before he mentioned pyloric stenosis. He had it in my charts that when Andrew was born, not to give him anything to drink until they did testing. Well, of course the hospital didn’t read that. Andrew was born 8-19-05. That was on Friday evening and that night they took him to the nursery and you guessed it – they gave him the sugar water. His belly blew up and the next morning they sent him to the children’s hospital. How awful for me, because I had to stay at the hospital that I delivered at for my recovery.

The GI surgeons were called in and they went in to surgery on Sunday and opened Andrew up to see what they could find. They did not see a malrotation or pyloric stenosis. Then they did biopsies and tested for the Hirschsprungs. That came back positive. Andrew had some problems during the biopsies due to interactions with the medicine he was on and the anestisia.

Andrew had a colostomy for about a month.

Andrew eventually had the bad section of his large intestine removed and seemed to be doing pretty well.

By this time we also had found out that he had cardiac ASD, hypospadius, undecended testis and microcephaly.

After Andrews pull through surgery he did well. We went for a few months with no problems. He did have an NG tube at home and we had to probe his bottom and do rectal irrigations. We felt so bad for having to do this to him.

Andrew has had several bouts of colitis. Once so severe when he was 4 1/2 months old that he dehydrated to the point that his body started shutting down before they finally got an IO started. They spent way too long trying to get an IV. Anyway, the doctors have talked about an ileostomy, but we are trying so hard to not have to do that. I (the mom) have quit working to stay at home. Since I have been home, Andrew has not been sick, so we are trying really hard to make ends meet the best way we can for Andrew’s health.

Andrew is a pretty happy toddler. He started crawling right at his 1st birthday and really started walking good when he was about 20 months.

Andrew eats well, but we think that because of his weak muscles, he has problems digesting certain types of foods. We stay away from meat, dairy and gluten. He does get some of these foods on a weekly basis, but we try to stay away from them on a day to day basis. He currently is on a formula called EleCare. It seems to be working really well for him. It’s a nutritionally complete formula so, if he goes all day and doesn’t eat anything, it’s OK. He is getting everything he needs through the formula. We also give him a probiotic called Florastor Kids. Because he was getting the colitis so much, we were worried about the amount of good bacteria in his body. We weren’t sure his body was able to make enough to keep him healthy with him getting sick and being on antibiotics so much. Since he didn’t do well with the soy or dairy yogurt, we started this Florastor Kids.

We still have to do rectal irrigations on him once a week or at least once every other week. He seems to do well having BM’s on his own if we keep his diet easy. Prunes work great!

Andrew has a lot of toys and plays with them all, all the time. He loves to throw things and everything has to go into his mouth at some point. I try to give him a toothbrush or teething ring or something to hold on to, to put in his mouth, but he will pick up something in the other hand and just put it in his mouth too.

When he is tired he tends to take his hands and hit on his head. I don’t really know why he does that or if it is a MWS trait or not, but that’s how we know when he has had enough.

Andrew understands very well. I really think he understands what we are saying and if we show him something once, he remembers that and will do it that way the next time – such as with his toys. His speech is delayed. He is only saying mama and bubba (for brother) and use to say dada. We also think he says nigh-nigh (when he is sleepy). He does babble a lot, and since he can’t get the words out, he hollers a lot. He doesn’t really scream when he is in a good mood, but am really not sure what other word to use besides holler. He makes loud sounds. Andrew does use some sign language. He will sign: more, eat, drink, momma, daddy, night-night, all done, and maybe a few others that I can’t think of right now. So…we are thinking that he will be able to communicate with simple signs as he gets older. Right now he is so focused on learning to walk and squat that the speech and fine motor skills are just kind of over to the side right now.

Andrew also had several ear infections. He received tubes and has been infection free and his hearing is good. Currently we are seizure free, but we know the high possibility is there for it to happen at any time. We have had an EEG done to see if he was having seizures, but the only thing they noted was a tremor once when he woke up.

We are still learning about MWS and at this point with Andrew we do not know what the future holds. We just know that God has made Andrew in his likeness and that is a perfect as can be. We know that Andrew will be Andrew, and no matter how much we compare him to his big brother or other kids, there just is no comparison.
One of the things that we have learned with Andrew is to never let anyone tell you that because of the Mowat-Wilson that your child won’t do this or won’t do that. I read stuff on the internet and had doctors telling us that Andrew wouldn’t walk for years and if he did he would probably have to have a walker, and he is living proof that the “professionals” don’t always know everything and that they only “practice.”

If you are a parent, relative or friend, and are reading this, just believe that your child can rule the world, so to speak. Even though we didn’t know that Andrew had MWS, we were hooked up with the early intervention program very early. There is so much help out there these days and by the time your child is 2 months old, there are certain things that they should be doing and if they aren’t, start getting advice and help. I know that there are typical kids that don’t talk until they are 2 years old, but maybe if they would have had speech therapy intervention sooner, they would have been talking sooner. I now am a huge believer in getting as much help as possible. We deserve it. Your child deserves every possible opportunity. If we don’t offer the opportunities, then they can’t grasp it. Even though we offer, they may not grasp it, but at least we offered it.

9-19-07 Andrew had his first seizure today. It was a seizure brought on by fever. His fever was brought on by the infection in his colon (colitis). We were only in the hospital for a couple of days for the infection and we are home now giving him antibiotics and doing rectal irrigations daily. He is doing awsome and is very happy and started back into his therapy sessions on the 24th.

He is now 2 years, 1 month and 6 days and is doing wonderful. He still isn’t talking much, but he is walking almost like a pro and his PT has him doing hurdles! Well, that’s what we call them. He has posts that he sets up and make Andrew step over. He is doing great with that. He has to pick up one leg and stand, balancing himself on the other – – and he is not allowed to hold on. He is doing really great with that. He also still has OT, Speech and Special Instruction. He is trying to do somersaults on his own, which is just amazing. Our older son plays baseball and Andrew also loves ball. He has a small bat of his own (plastic) and he swings it and throws it down and runs bases in our living room. It’s so cute.

Andrew really understands well. Even though there are things we tell him “no” to and he continues to do it anyway, that really is a typical 2 year old thing!

Andrew is still on the EleCare formula, but diet wise he is vegetarian. We try to give him as much raw fruit and vegetables as possible, and this is what we feel is best for his system. 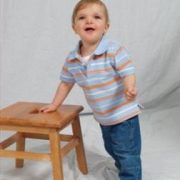 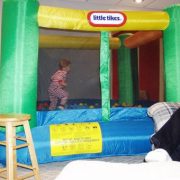 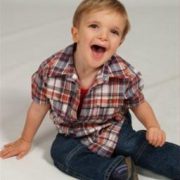 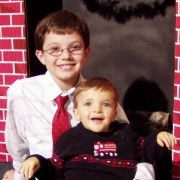 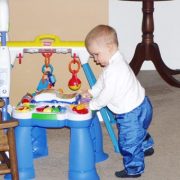 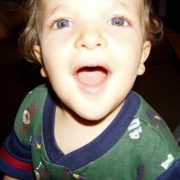 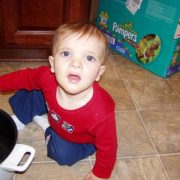 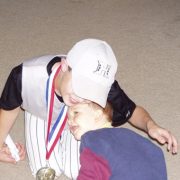