Isabella was born in May of 2003. I had a perfect pregnancy compared to my son’s (pre-term labor, 10 days hospital to stop it, 3 months in bed). Delivery was a piece of cake also compared to my son (forceps, rotate him inside my belly, episiotomy, and no time for epidural – ouch!). My only comment when I first saw her was that I thought that her eyes were quite a part, but no big deal about it. The only thing that was detected at birth was a murmur of her heart, an echocardiogram showed that she had a PDA  and a VSD , both small, and should be self fixed by certain age. (We just had an echo at 21 months of age and both are fixed!)

During her first four months of life she was just the perfect baby during the day but with frequent awaking at the night. Oh well.. babies wake up at night because they are hungry! She still wakes up at night ready to play. For 16 months she would not sleep over 6 hours per night with some awaking in between. At 16 months we started using Melatonin and it has been helping.. now she sleeps from 9-5, sometimes until 6 am when we are lucky.

I didn’t get to breast feed her; she refused the breast and preferred the bottle. Since I breast fed my son until 9 months I was a little disappointed to give her bottles and tried pumping which was really stressful. When we started Bella on solids, she loved it but her ability to swallow the food wasn’t good and we had to help with the pacifier. Not normal, but not a big deal we thought. She grew out of it, but still gages sometimes when eating.

At 9 months of age, on our visit to the pediatrician we realized that she wasn’t developing at an normal rate because she couldn’t do any of the milestones that a 9-month old baby was supposed to. We went to a developmental specialist that detected that Bella was delayed in her motor/cognitive skills and we immediately started PT and OT once a week. She was making progress, but the delay was still there.

Searching for the cause of the delay, we found out that Bella has a level-1 bladder reflux , and her MRI showed a mild thinning of the corpus callosum , which sometimes is seen in children with cerebral palsy. Since we had seen a geneticist once and nothing was found, we started to believe that this “corpus callosum thinning” was the cause of her delay, especially the motor delays.

On the follow up visit with the geneticist 6 months later she mentioned in her report that she suspected MWS, but since Bella didn’t have a history constipation or seizures she would like to wait to test her. When I got a copy of the report at home I looked up online for information on MWS and read as many articles as I could find (even the ones that I couldn’t understand much).. and I saw a picture of a boy that had the same look in his eyes as Bella. It clicked. Then I started to compare the symptoms and the facial features… there were some matches, but the look of that boy.. We just had to rule it out… We contacted the doctor and told her that we found articles online that explained MWS can be associated without HSPR disease and kids that started having seizures later, and convince her to test Bella and she agreed. We sent our blood to France and a month and a half later (Feb 22/05) we got the results that Bella has MWS.

This is the medical side of Bella. The human side is that Bella is an adorable happy girl 99% of the time. She likes to play with her hands, flicking small objects into a container or banging two objects close to her ears. She can entertain herself with a toy for a while, but we feel that she is passing that stage and starting to explore more and more. Socially Bella likes to watch other kids playing but when they get too close or loud she cries. She loves going shopping with us.. Shopping cart rides are her favorite. She loves watching everything around her. She also loves TV. Elmo is her favorite show and toy (the one that sings and dance – almost her size). She also enjoys the Baby Einstein movies and puppets in general.

As far as speech, she babbles a lot and repeats sounds when prompted. She communicates through pointing, some sign language and we are teaching her to use ProLoquo on her IPad. 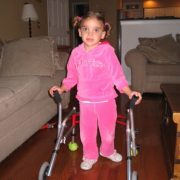