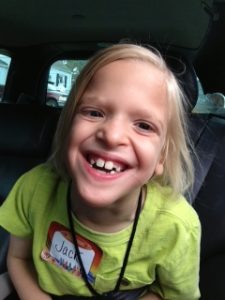 Jack is a 7 years old. He was born August 3, 2006. My husband Rob and I also have a 10 year old son Max. Jack was born 3 weeks early. I knew early on there were concerns with Jack during my pregnancy. When Jack was born he had a form of Spina Bifida. It was treated with surgery and we felt we were in the clear. At age 6 months we realized Jack had very poor vision. He was diagnosed with Cortical Visual Impairment around this time. Jacks vision has slowly improved over the years. He now sees quite well up close and in the distance. The Commission for the Blind still follows Jack.

Jack received early intervention services from 6 months to age 3. At 3 he entered a handicapped pre-school program through the public school system. During these first few years we spent much time in Neurologist’s offices at the Children’s Hospital Of Philadelphia. We were searching for a diagnosis to encompass all of Jacks delays and abnormalities. Jack was delayed in all of his milestones.

In May before his 3rd birthday we received his diagnosis through blood analysis, Jack has Mowat-Wilson Syndrome. Jack learned to walk at age 4. He now navigates around the house and at school very well. (with supervision) Jack has a seizure disorder that is controlled by medication. He is followed by a Neurologist at CHOP.

Jacks loves the school he attends, Antrim Elementary. He has a special Para-professional who is with him throughout the day. He is very bonded with Mrs. Paula and lights up when he sees her. He loves his pets, Zoe our 12 year old black lab and Mu our cat. He loves to take walks with Zoe on the leash. Jack laughs and smiles the whole time and insists that we stop and sit on the benches downtown to take in the sights. He also loves music, race cars and trucks, books, and bouncing balls. Jack also loves to eat. He was on a puree diet for the first 4 years of his life due to low oral muscle tone. Since he has learned to chew he devours everything from tacos with rice and beans to fresh fruit.

Our family is in the restaurant business so conveniently we are lucky to have great food all the time.

We live in Point Pleasant Beach, NJ. We are surrounded by Aunts, Uncles, Cousins and grandparents, all of whom adore Jack.
Jack will be 8 August, 2014. He is a beautiful child with an infectious laugh and smile that melts hearts daily. 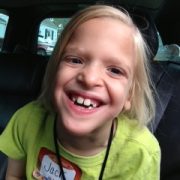 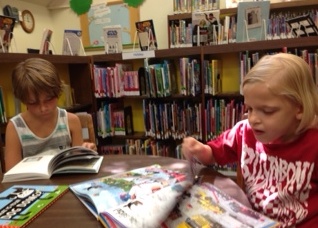