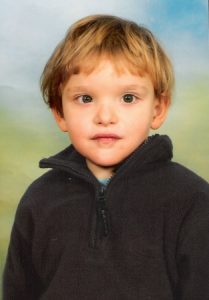 Joke was born on 23.06.2002, two days later than her niece.  The pregnancy was normal although a bit stressful since we were renovating the house and since Lucie (my wife) was home the whole time.

Immediately after Joke was born she was examined, and other than the fact that her head was a bit on the small side, the paediatrician did not notice anything out of the ordinary.

The first day we noticed that Joke would not suckle.  This was strange, but not yet alarming.  But also the second day Joke would not suckle and Lucie started to use the breast pump in order to be able to feed Joke with breast-milk.  The first few days Joke lost quite a lot of weight, but regained some of it by the time the week was out.  Since it was extremely busy in the maternity ward we were sent home (I am convinced that Joke should, in her state at the time, not have been allowed to come home with us.

During her second week (our first week at home with Joke) she would not eat more than 20 to 40 ml at a time, and for this Joke and we took half an hour to often one hour.  With 3 hours between feeds we had the feeling to be doing nothing else.  Often Joke would throw up forcibly (projectile vomiting), and what we had patiently fed her during the course of one hour came out in a matter of seconds.  By the end of the week Joke had lost weight considerably, and we took her back to the hospital for an examination.

The paediatrician examined her and immediately admitted her to the neo-natal-ward. One day later Joke had a drip and a tube down her nose into her stomach to feed her.  Over the course of four weeks, and with a lot of battles (some won, some lost) Joke gradually regained some weight and got stronger.  Finally after four weeks we were allowed to take Joke home.  In the mean time diagnosed with a bad case of reflux, a heart-murmur, a slight dismorphia of her forehead, a wide nasal bridge and a head that was on the small side.

Eating remained a problem.  Joke took Gaviscon (antacid), Zantac (reduces secretion of digestive acids) & Motilium (to facilitate the passing of the food and against throwing up).  Notwithstanding these medications Joke frequently threw up, and the digestive system remained also Jokes Achilles-heel. Any disease she (even a simple cold) would have repercussions on her digestive system resulting in diarea, throwing up and finally dehydration. For the first year Joke was in and out of hospital.  She was also infected with the rota virus three times, one time in combination with campilo bacter (a bacteriological infection).  This is when Joke had her first bout of fever convulsions. We immediately went to our house-doctor that lives across the road, and he administered some valium and called an ambulance.  By the time the paramedics arrived Joke had a second attack.

During her stay in the hospital they took a short-span-EEG, with no conclusive results.  Since, however, the recurrence of the fever convulsions were atypical of a normal attack, some month later a long time EEG (overnight) was taken that showed epileptic activity.  We received a prescription for Depakine, and slowly built up the dosage.  Joke seemed to respond well to this treatment, and when a repeat exam was done one year later no epileptic activity could be seen.  There was only one occasion (probably also triggered by high fever) of an epileptic seizure since.  When I wrote the Dutch version of this story, some week ago, I wrote and has been attack-free until now, but on Saturday last Joke did a rather long attack, and was disoriented for hours.  She also slept a lot.  We do not know how this is going to be in the future.  This was a first for us.

Until she was about two years old Joke would wake us up between 4 and 8 times a night.  She would either be moaning or crying, or later on she would be stumping her feet or jumping in her bed.  For a year after that Joke slept well, but of late she wakes up at least one time every night around 4 in the morning and wakes up around 6.  We are now starting to think that Joke might, once more, have epileptic activity during the night, resulting in this “waking up”.  She is often restless and kicking all sided of her bed.  The baby bed is rapidly becoming to small but we don’t dare to put her in a regular bed in fear of her trashing the room and the cupboards or unloading all the cupboards.

This is where our biggest challenge lies.  Joke has never been easy to take care of, but of late the problems are increasing and driving us to the limit (and beyond) what our nerves can cope with.  When changing her nappies (Joke still shows no sign of willingness to use the potty) she is often very unruly, uncontrolled kicks about wanting to turn around, tearing her nappies from under herself or smearing the content of her nappy everywhere. She grabs everything in her reach and throws it away forcibly.  Getting dressed is also an uphill battle (we can still win it most of the time).

After that (in the morning trying to get ready to school and for work) it is “feeding time”.  Joke seems to have developed a very negative attitude towards food.  She is very nervous while eating, and will often knock the spoon with food out of our hands.  Of late, however, the food is staying down.  We still have Joke on Zantac and Gaviscon.  Motilium is only given when she has clearly shown problems keeping her food down.

Some time ago Joke started (finally) to eat bread and food with some small chunks.  For about one year now this evolution has reversed itself in that Joke will now only eat (drink) baby milk, growth milk mixed with mashed cookies.  At noon she will only eat blended food, and at 4 o’clock she will have a yoghurt or mixed  and blended fruit.  Anything else will either result in her throwing up or putting up a fight in order to prevent it from ever reaching the surroundings of her mouth.

Joke is still very much in her oral phase, and everything she gets her hands on is immediately put in her mouth.  She is chewing everything from books to toys, spoons, her clothes, zippers, … . there is no stopping this.

When she was 2 ½, Joke started to develop a will of her own.  This means she has her own agenda, and this takes absolute priority.  Telling Joke “NO” means that she will double the effort to keep on doing what she is doing.  If she has taken something breakable we must never under no circumstances say no because than she will throw it to pieces.

Her behaviour is erratic, impulsive and “auto stimulating”, this means that if she does not get continuous external stimulation (from other kids at school, or from us) she will start taking care of the necessary sensory input herself.  This means that she will do anything, shouting, knocking, throwing, running or a combination of all above.  She is very unpredictable in that an impulse can make her do things at any time or interrupt an otherwise normal action.  This means that Mieke (our youngest) often “takes a hit”.  We cannot let Joke out of our sights for one second.  Even when we are sitting right next to her it is sometimes impossible to predict when she is going to strike out.

Her attention span is limited to a few seconds to one minute depending on the activity.  This means that we have to try every few minutes of the day to try and find something new to keep her busy.  If she is not kept busy she will find some destructive way of spending her time.

This means that we can make very little time for Mieke.  We notice this very well when Joke is away for a weekend.  Than her little sister really starts enjoying herself.  She starts playing constructively, engages in whole new interactions, and seems to learn a whole lot of new things all at once in one weekend.

Joke does not speak yet.  Although we have tried with SMOG-gestures, Joke does not use them.  Although this alternative mode of communication was meant to help Joke in her communication, Mieke has picked it up very quickly, and is using the most basic of SMOG gestures to tell us what she wants.  Since about two weeks ago Joke is trying to copy this from Mieke.  We are keeping our fingers crossed.  Joke, however, seems to understand almost anything we say, down to nuances like under, on top, behind or in front.

We have no idea of how Joke’s development is going to continue.  From what I have read on the site I believe that, even if Joke is officially diagnosed with Mowat-Wilson, we still will not know in what direction Joke will develop in the future.  We hope, however, that Joke will calm down a bit and will get a better grip on her erratic movements and her tantrums.  If this is not the case I have the feeling that my wife and myself will not be able to cope much longer with Joke at home.

I hope this gives a bit of a picture of what Joke is like and has been through.  I also hope that the picture I have drawn here was not to black or negative. 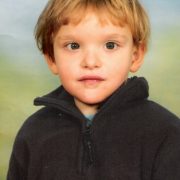 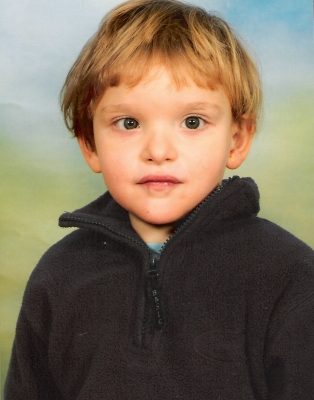 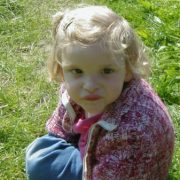 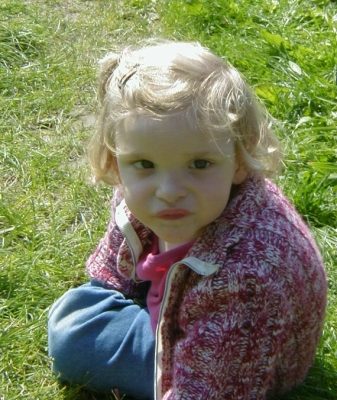 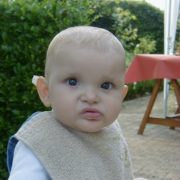 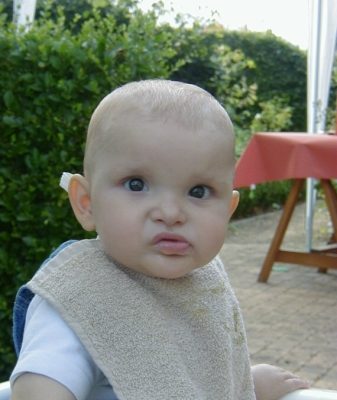 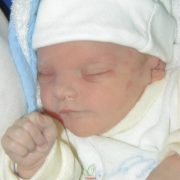 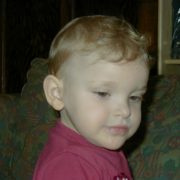 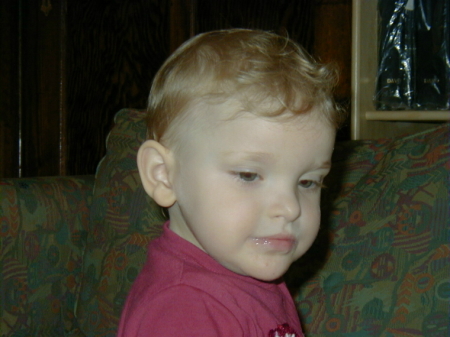 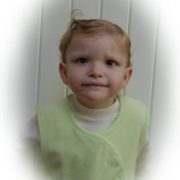 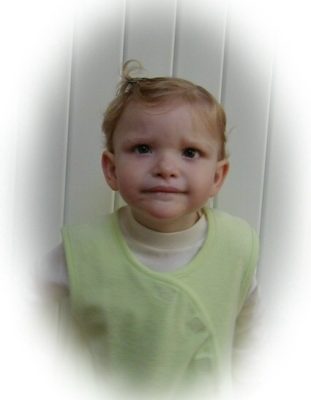 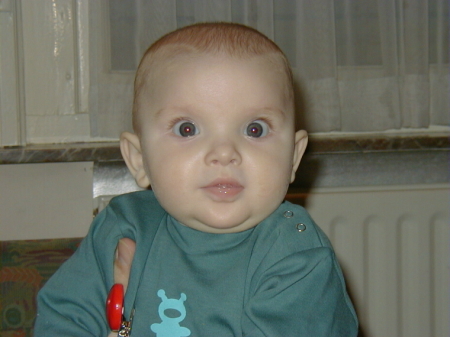