My pregnancy with Lauren was normal and not the least bit complicated.  Even the birth itself was rather easy (as it was my second).  She was born 3/3/03 and weighed 9 lbs 2 oz.  The next day, she began to not feed as well.  At one point she had projectile vomiting and we called the nurse in to help us clean everything up.  At that time, the nurse noticed that Lauren’s stomach was distended and took her to the NICU.  Later that night, the docs told us that she still had not passed her meconium and she either had a blockage or Hirschsprung’s Dx.  They had to transfer her to another hospital with better facilities to handle her testing.  At the Medical College of Georgia’s Children’s Medical Center, she was diagnosed with Hirschsprung’s Dx and GERD.  She had surgery to create an ostomy at four days old.

Looking back, that next six months were probably the healthiest of Lauren’s life.  Her eating and weight finally picked up and she seemed to be progressing steadily in the right direction.  At six months, her surgeon performed the pull through surgery and took out her “bad” colon.  After that, Lauren was admitted into the hospital three times in the next three months for enterocolitis (w/ c.diff), RSV, and bronchial pneumonia.  And January 2004 she had tubes inserted in her ears.  We all began to notice a delay in her meeting the developmental milestones.  Her doctors assured us this was just from the stomach surgery making her muscles so sore and her constant hospitalizations.  We began physical and occupational therapy to help her along.  Speech therapy was added later.

Lauren had her first seizure in March of 2004, just after her first birthday.  She was running a fever and coming down with another ear infection, so we were told it was just a febrile seizure and not to be concerned.  Her next seizure was two months later and there was no fever associated with it.  So, the neurologists put her on Trileptal and we began making routine visits with them also.  They admitted Lauren for a sleep study in November of 2004 and then did another MRI w/contrast which revealed a “porencyphalic cavity” in her left temporal lobe.  At that time we were told to just keep her on the Trileptal.  That seemed to work for awhile as she only had a few breakthrough seizures with growth spurts.

Summer of 2005 brought belly issues again.  She would have what seemed like severe pains, as she would just stand and scream for hours.  Sleep was always interrupted by these episodes.  We went back to doing daily rectal irrigations just to help empty her system so she could get relief.  Her GI doctor and surgeon discussed her case together and recommended doing another temporary colostomy until they could find what was going on.  That surgery was in October of 2005.

Now that her belly is better, we are back to seizures again.  She has had three seizures in the past six weeks, as of my writing this.  An epileptologist in the neurology clinic has taken over her case and wants us to go through a surgical consult as he says the cavity is an empty cyst that can be surgically removed.  We are still waiting to hear about that one.  To us, this is the scariest surgery we could possibly imagine.

I was doing research on a Hirschsprung’s site before Lauren’s second colostomy when I ran across a parent talking about MWS.  I immediately started searching sites for the syndrome and when I began reading the symptoms associated with it, I just began crying.  We had already been through genetic testing and were told everything was normal.  I just couldn’t believe that all these different things were affecting my little girl and none of them were related.  MWS seemed to pull them all together for her.  I contacted the genetics counselor again and asked them to please test her for this.  They had never even heard of Mowat-Wilson syndrome and had to do their own research to be able to respond to me!  Anyways, four months later we got the results from Children’s Mercy Hospital in Kansas City, MO.  They confirmed what we already knew, Lauren does have MWS.

As far as personality, she has loads of it.  She loves to get in the floor and play with us and her big sister, Hannah.  She especially loves bath time, hide and seek, watching videos and playing her piano.  She sat by herself at 14 months and she walked unassisted at 26 months.  She still has problems with balance and her walking is a bit slow and unsteady.  She would rather “lick and flick” her toys than play with them the appropriate way.  We have tried daycares at different periods in her life, which none have worked out well.  She has now been referred to a center for “medically fragile” children and is scheduled to start this month.  We have had days where Daddy ended up with a bloody nose and me a busted lip from her tantrums.  But, when she looks at us with those big blue eyes, we don’t care.  As long as she is still here with us, every day is a miracle. 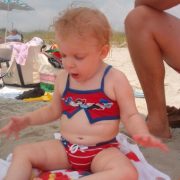