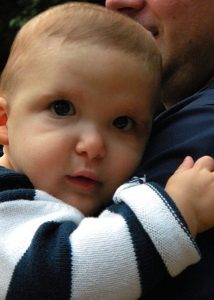 Logan was born on December 5, 1997 in Naples, Italy.  We were stationed in Gaeta with the Navy.  My pregnancy was fairly uneventful and Logan was born at 42 weeks.  Logan has an older brother, Jordan who was 2 when Logan was born.  Jordan is a healthy and typical little boy.  Logan weighed 7 pounds and was 19 inches long.  At the time of his birth we were told that he had a hypospadius, but other than that everything else appeared to be normal.  He was very quiet and never cried like my other son did right after he was born.  When Logan was 2 days old and just before we brought him home his stomach started to distend and the doctors changed his formula.  He still had not had a bowel movement.  Within a few hours, Logan started spitting up and was taken from the room to be checked out.  Hours went by before we saw the doctor again and this time we were told that when they checked his stomach they heard something wrong with his heart.  Because the naval hospital was not equipped to handle cardiac problems, much less infant cardiac problems, Logan was taken to a local Italian hospital in Naples for a test and then to another hospital where he was admitted.  At this time the problem was still unknown to us, but Logan was in stable condition and we were told that the Navy was going to medevac us back to the US.  Two days later, we flew to Landstahl, Germany and remained there overnight to make sure that Logan could handle the flight.  He never fussed and would just lie there and watch everything around him.  The next day we flew to Andrews Air Force Base and from there they loaded all of us and our luggage onto an ambulance and we rode all the way to Philadelphia to the Children’s Hospital of Philadelphia.

It wasn’t until we got there that we learned that Logan had Interrupted Aortic Arch , Ventricular Septal Defect  and Hirschsprungs Disease.  At one week old Logan had open-heart surgery and 3 days later he had a colostomy.  Logan recovered great and we were able to bring him home on Christmas Eve.

Logan was taken off of his heart medicine at 6 months old and has not had to take heart medication since then.  We moved two more time during his first year and finally got stationed in Atlanta, Georgia.  For his first year Logan did very little.  He smiled late and was just learning to sit unsupported by 1 year.  He had gained enough weight at 1 that a pull through was done and was successful.  I had been making excuses as to why he wasn’t progressing, but by this point even I had to face the fact that something was wrong.  We saw a doctor at the Naval Base who spent 5 minutes with Logan, did no tests and then told me that he had Cerebral Palsy.  I told them they were wrong and that even though he could not talk to me that I could tell that there was so much going on in him through his eyes he just couldn’t express it.  When we got settled in Atlanta further testing was done by a geneticist and all of the tests were returning normal or negative.  No one had an answer and I was told that we may never know why Logan did not develop the same as other children.   The hypospadias  was repaired just before Logan turned 2 and everything went well.

By age 2 Logan was sitting well and was beginning to make attempts at crawling, but that was it he could not do much more.  He was not growing as fast as other children and was always a lot smaller than children his same age.  Everyone told me how lucky I was to have such an easy kid.  He never fussed and was just happy to be held and to just watch people.  He discovered how funny his older brother was and would just laugh and laugh at Jordan.  Jordan also enjoys making faces at Logan to make him laugh.  (This has not changed)

By age 3 Logan was starting preschool at a local elementary school.  The geneticist kept testing him and we were still not having any luck.  By this time I decided that I did not need to know and was going to concentrate on helping Logan become the best he could be.  Logan learned to walk just after he turned 3.  He learned by trying to walk to his brother.  He would not do this for his father or me but would to try and get to his brother.  Within a few months he was walking across the room and was able to get to a standing position by himself.  Logan still was not talking but we knew he understood a few things that we were saying.  It was also during this time that we realized how strong Logan’s digestive track was.  We began finding things in his diaper that did not belong there—band aid, bark, lego, etc.  The pacifier had to be taken away from him because he was biting through it.  Logan also bites everything.  He loves his shoelaces along with anyone else’s shoelaces that he can get.  At age 3 Logan also had his first seizure; it was a long seizure and was brought on by a fever.  He was taken to the hospital by an ambulance and was released a few hours later when he recovered.  It was a few months later when he had another seizure and this time no fever.  He had 1 more and then the doctors put him on Keppra to prevent the seizures.  He has had a few more since then, but it is right after he has had a growth spurt and we have to increase the medicine.

Logan also developed a huge appetite.  I have had people comment on never seeing a child so small eat so much.  He eats twice as much as his brother.

During the next few years Logan continued to make progress.  Last year we were told that he might have Angelman Syndrome and after reading about it I got excited because it did describe Logan’s personality, but it did not explain all of the rest of his problems.  The test returned negative and we returned to the geneticist.  This time a new doctor wanted to see Logan and stated that she had been looking at his file and thought she had an answer.  She described MWS and pointed out the facial features to me.  I was amazed.  A photo and description of Logan was sent to Germany and the doctor there confirmed that Logan fit the profile.  Blood work was done and was sent that day to Germany.  We hope to have a final answer in a couple of months.

Now Logan is in 1st grade and attends a regular elementary school but is in a special class. He gets to spend some time each day with the regular class and goes on frequent field trips.  He uses a hip talker and picture words to communicate.  He still understands a lot more than he is able to express, but he continues to move forward.  Logan can now walk up the bus steps by himself, he can walk on uneven surfaces, is trying to run (more of a fast paced walk), he can hand over hand feed himself (he can almost do it by himself), and he absolutely loves people.  He wants to touch anybody and everybody.  He still rips up paper, but is quicker now, and baseball is better than cartoons.  The potty training is coming, slowly.  Logan also really loves light switches so all of our lights get turned on and off all of the time.  He loves the computer and uses special programs at school.  He loves sports and will get a chance to play his first year of baseball this year in a special population’s league.  Jordan is Logan’s favorite person and he loves to chase him, and Jordan has been an awesome big brother and tries to teach Logan how to dribble a basketball and how to play catch.  Logan still loves to eat and he is still small for his age.

I love to sit back and just watch him play and the look on his face when he is up to something.  He is the happiest kid, especially in the mornings.  It is so funny when he knows that he has something that he is not supposed to—he will start ripping as quickly as he can because he knows that in just a minute it is going to be taken away, and the whole time he just grins.  Those big blue eyes tell a million different stories. 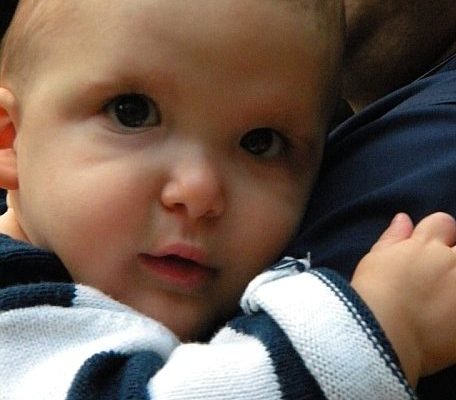 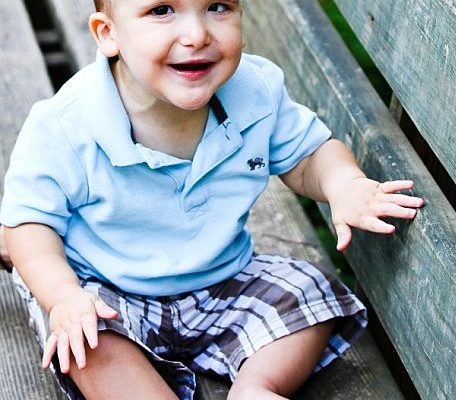 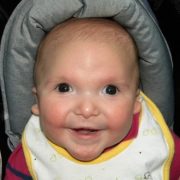 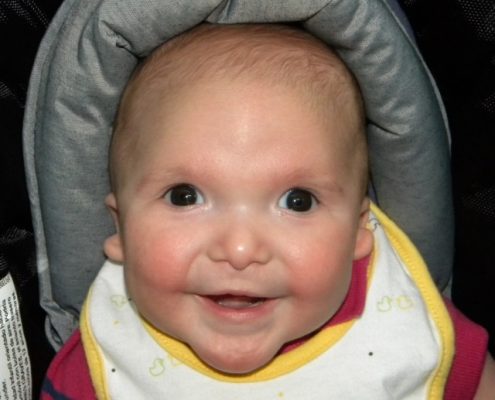 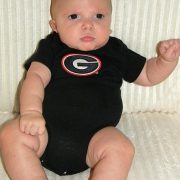 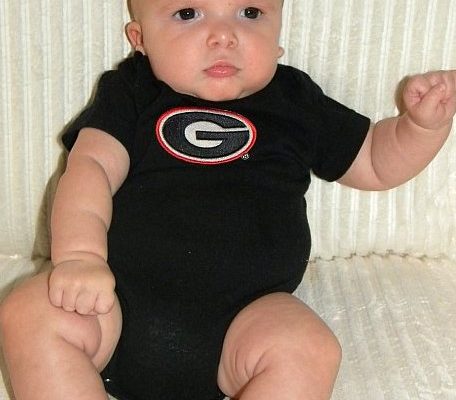