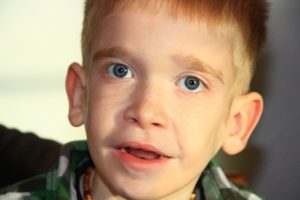 Hello, this is the life-story about Niklas Majer.

Niklas was born at March 9th 2000 in Biberach in the south-west of Germany. His weight was 3900g and his body-length was 55cm. He has blue eyes and blond hair. He has got a sister called Sina. She was born in October 1997.

Niklas was born in natural way without complications. But we note soon that something wasn’t ok with him. He wept often and something in his stomach caused him pains. At the second day of his life the doctors made an emergency operation at his bowel. He get an artificial anus. The diagnosis was hirschsprung’s disease. One year later  the doctors made the big operation and cut off the bowel fragment which didn’t work. With two years Niklas had the last big operation where the artificial anus was removed. His bowel works since that day normal. Only sometimes he has opstipation, than he gets some medicine.

Since the second year of his life Niklas is able to sit. For his epilepsy and his seizures he gets  medicine as well.

In the age of four years he started to walk. Slowly, step by step. He went gladly to a playschool for special children.

In the beginning he had regulary inflamed ears. A common cold and the pus flow out of his ears. The only solutions were tympanostomy tubes.

With six years he changed to a special school for handicapped children. He is absolutely happy to go there. In the morning at 8 am the school bus pick´s Niklas up at home and at 3:30 pm he returns the same way. In school he learns sign language, to eat, to swim, to ride a horse, has got physiotherapy, speech therapy and but also enough time to laugh and play with other handicapped childs.

Niklas wears orthotic in his shoes and owns a special chair for the toilet.

He loves animals, to make trips, games of dice and to listen music (especially folk music and german punk). His favourite dish is spaghetti with sauce and sausages – huge amount of sausages.

His treasury of words are “mom”, “baby”, “hi” and some words of the sign language.

He prefers masculine persons. If there are many women in a room but only one man, he picks out the man.

Niklas is a blithely child, laughs a lot, is happy in his life and gives us at least as much pleasure as sorrows – like any other healthy child.

Thank you for reading this, kind regards and well-being to all others MWS-families in the world. 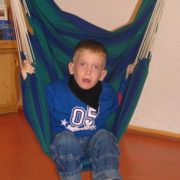 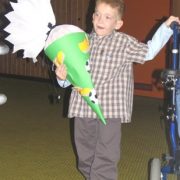 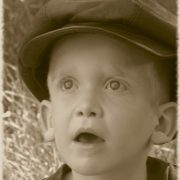 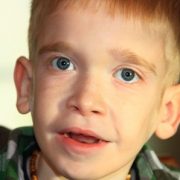