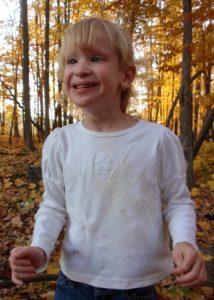 Sarah was born on February 2, 2003.  She is one of a set of spontaneous boy/girl twins.  My pregnancy was quite normal—as normal as a twin pregnancy can be.  I found out I was carrying twins at about 16 weeks.  Everything proceeded well.  At 36 weeks Sarah and Timothy were born.  I delivered naturally without meds.  Timothy was born first followed by Sarah in a breech position.  Both babies had Apgars of 9 and 9.  Both babies weighed 4 pounds 14 ounces and were 17 ¾  inches.  All seemed just perfect as far as everyone present was concerned.   Sarah’s early days were not without challenge but we attributed much of it to being preterm.  She had a weak suck and a tongue thrust that made nursing a huge challenge.  Like all babies she (and her twin) lost weight in the first few days but over time began to gain.   She spent one day under photo therapy lights to help with jaundice.  Sarah went home from the hospital 5 days after she was born.  Her newborn period was fine, although much of it is a blur due to sleep deprivation on my part.  Nursing was a consistent struggle for about 3 months but then she got the hang of it and continued till she was 17 mos.  Sarah was slow to gain weight and over time we began to notice that she was missing milestones.  This was especially apparent with a typical twin growing up along side of her.  At 6 months of age there was concern about blindness and we saw a peds ophthalmologist.  He assured us that what he saw in Sarah was merely a delay in the maturation of her vision and over time this proved to be correct.  Sarah does have some strabismus and epicanthal folds.  We did have to do some patching but as of now her vision is within normal limits.  Around the same time we had her vision  first evaluated she also had an MRI.  The results came back structurally normal so we continued to puzzle what was wrong with our little girl??  Questions arose about her hearing so that too was evaluated.  It was normal although she had several infections and eventually had tubes put in place.  She hasn’t had an ear infection since.  She began receiving Early Intervention Services at about 6 months of age.  At one year of age we saw a peds neurologist and he diagnosed Cerebral Palsy.  Her doctors felt that some type of brain damage was apparent and that the damage was affecting her ability to control her motor function.  By age one she was getting close to sitting without assistance.  Easter of 2004 she had her first bladder infection, which led to having a VCUG and the diagnosis of a bi-lateral kidney reflux.   In May of 2004 I took her to the Dr. for a DPT shot.  In the middle of the night/early morning she began seizing.  (Her first seizure)  We found her later that morning still actively seizing.  Judging by the damage she did to herself from the convulsion she likely seized for hours.  EMS had to come to help stop the seizure, which they initially could not do, and she was transported to the hospital and we spent the entire day there.   About a month later Sarah began “crawling” – scooting rather, an army crawl, pulling herself forward with her arms.  Grandpa affectionately called her “Scoots.”  About 3 months later she had another seizure.  The fall of 2004 we started her in a movement program called Conductive Education.  CE is a very intense program.  I truly believe the time we invested in this program made a significant difference in how Sarah developed her motor skills.  A week after beginning she began to transition between sitting and lying on her stomach on her own.  It was amazing.   At 2 and a half years she began walking independently.  It took her a long time to move from walking with assistance to making the cross to independent walking.  We had a set of parallel bars set up in our living room that my Father-in-Law had made for her.  She spent a lot of time playing at the bars thus working on weight bearing.  This proved very beneficial for her since she had significant pronation at the ankles.  She wears braces to correct.  She began attending a preschool for children with moderate cognitive impairments in September of 2006.  Sarah is in the moderate to severely impaired range.  We have had to deal with prolonged seizures in our quest to manage Sarah’s seizure disorder.  She typically has partial complex seizures but almost always requires Diastat to stop them.  She is doing well on topomax to control her seizures.  At the beginning of April, 2007 we saw a new genetics doctor.   He decided to test of Mowat-Wilson Syndrome.  We received positive results on April 30, 2007.

On the personal side of things Sarah is a delightful, happy girl with a lot of energy.  She is much loved by 3 brothers, her twin plus two older brothers.  Of course we, her mom and dad, just adore her.  She has a great extended family too who shower her with much love.  Sarah loves purses and shoes; she is very “girly.” She still plays with baby toys and mouths just about everything.  She loves her dollies and hugs and kisses them and carries them around.  It’s wonderful to hear her squeals of joy upon locating a favorite toy from her toy box.  She loves to have bracelets on her arms or ankles and just about anything round will do.  She babbles and is fairly consistent about saying mama and dada.  She can respond with “yeah” for yes.  Beyond that much of her communication with us is by either nonverbal cues or just an understanding of her needs and wishes that has developed over time.  She is working with sound boards and PECS at school so there is some hope that we could use something like that in time.  She loves to ride a trike but needs some help with steering and we have attachments on the pedals to hold her feet on.  Sarah helps out at home by “assisting” me with emptying the dishwasher.  We take it one dish at a time and it makes the task take a bit longer than if I did it my own but I know she just loves to do it!  Sarah is just a tremendous blessing to our lives and we truly feel God planned her for us and will use her life for His glory.  We are excited about the future for Sarah and are enjoying her each and every day. 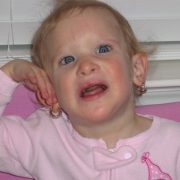 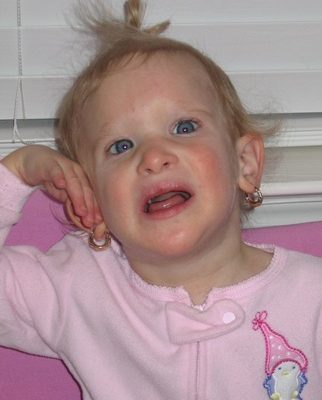 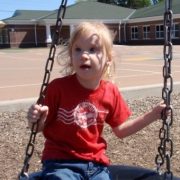 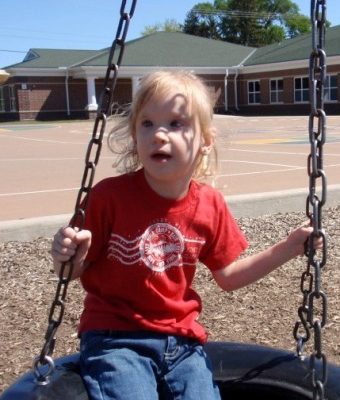 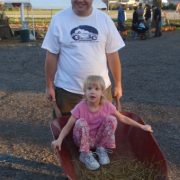 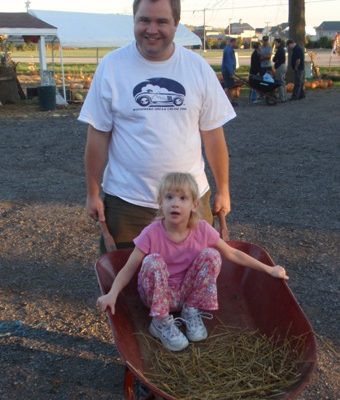 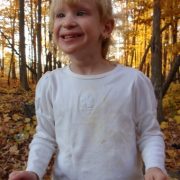 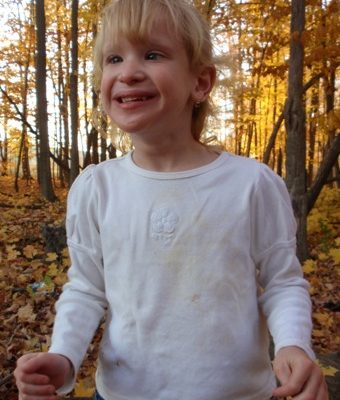 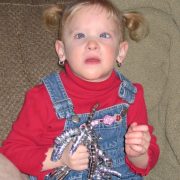 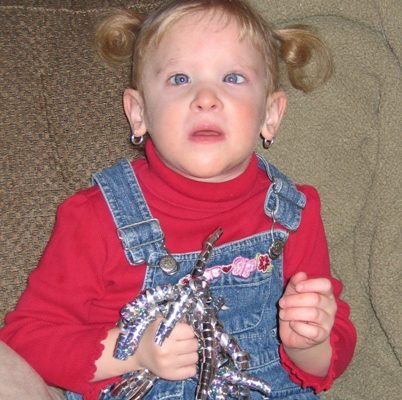 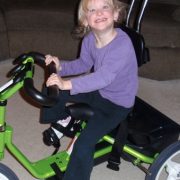 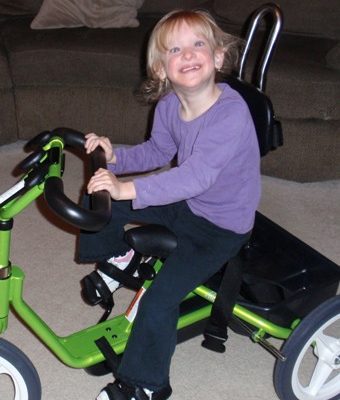 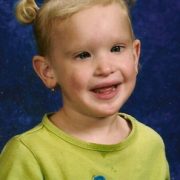 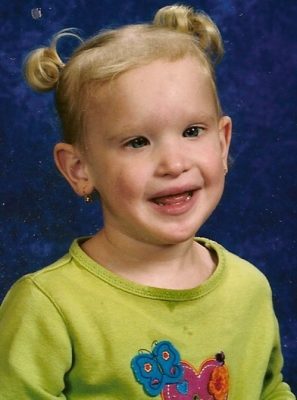 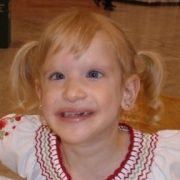 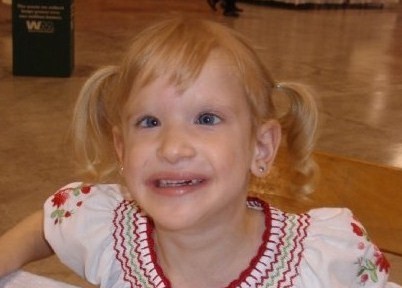 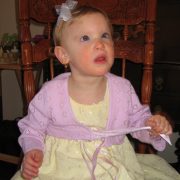 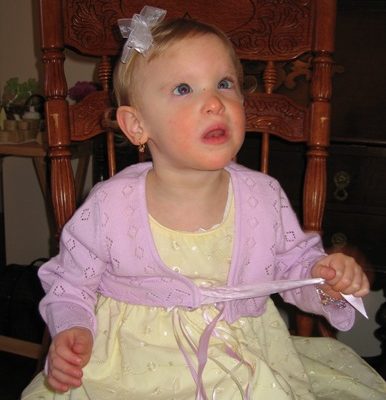