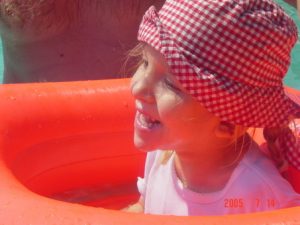 Our daughter Tess Reza was born on July the 10th, 2001 after a very easy 36 weeks pregnancy. She soon grew enough to take her home after a week. It wasn’t until after 4 months that we found out that something was really wrong. She was quit often sick and showed some mild signs of reflux, but this was all under control. We had no suspicions yet. Around that time we had to see a paediatrician in the nearby hospital due to an infection, and he was the first one who suggested an abnormality; he thought her head was rather small. That was the start of 6 months of tests and research, which resulted in the diagnoses of C-ACC, complete Agenesis of the Corpus Callosum. By then we also learned that, that probably was just one of the features of a syndrome, based on all the other special features she had: very retarded psycho-motor-development, broad nasal bridge and other facial features like pointy chin, small and flat shape of head, somewhat strangely shaped ears and especially earlobes, small upper lip, long toes and fingers and a happy demeanour! Besides all this, she was very often sick with colds, coughing, running noses and infections all the time and had a lot of ear-infections. Later, when she was 2 years old, she also developed epilepsy.

Like most children here, she developed a whole group of specialists and therapists around her. The first were still trying to uncover the unknown syndrome, the second ones tried to make her and our life as easy as possible. It soon became clear that her development in all areas was very, very slow. But also, that she was a very very happy child!

On January 19, 2004, Tess’ brother Luca* was born. His story is a very long and intense one as well, although he only lived for 4 days. I mention him here, because in a way his death lead to the discovery of MWS with Tess. In trying to explain his inexplicable passing away, the doctors started several different researches and due to some suspected similarities they included Tess once again in their tests. In November 2004, one very alert genetic doctor attended a congress and special workshop and it was there that she first heard about MWS and saw pictures of children who’s ears looked exactly like Tess’! Because a certain amount of other symptoms were also the same, she sent some blood to Dr. Rauch in Germany, who came back with the MWS-diagnoses.

Did anything change since then? No, but having a diagnoses seems to bring some peace of mind. It doesn’t change the way in which we take care of her, the therapies, or doctors we see. But it is so great to have found other parents and children! What a wonder the internet is… These children show even more similarities with my girl than did the children I heard about through this ACC-network I once joined. And that turned out to be so important to me; to have found recognition, to recognize and only need little words to explain. On the other hand, these children are at the same time still all so different, they all show so many different symptoms and features, that it’s not hard to imagine that in a few years some of them will ‘leave the MWS-group’ to ‘join another even more specified syndrome’, discovered by other doctors….

Anyway, I think in a way we’re very lucky. When I read the stories on this wonderful website of some of the other children, I think we’re blessed that Tess shows a somewhat ‘mild version’ of MWS. I feel so sorry for all the pain and suffering the other parents go through, whose children have very tough heart and kidney-issues or Hirschsprungs disease or sometimes severe behavioural problems. Who spent so much time in hospital and in great fear and uncertainty.

Of course our life is not what we thought it would have been. Of course it’s often hard and frustrating. And our future with Tess is so unsure and frightening that I hardly ever dare to talk or even think about it. But not in a million years would we trade Tess for 10 healthy children. She’s our life, our happiness, our everything.

And we do see progress. It’s slow, but it’s there. Cognitively (is that an English word?) she still is a little baby, with little understanding of the world around her. But that too, after a long period of what seemed standstill,  shows progress, as she starts to look around her more and more, to recognize (with a smile!) relatives and close friends, to react to us asking questions,  to react to a game of  bo-peep, to search for toys that we’ve hidden.

Concerning motor skills, she doing better. She sat independently at the age of 2.5. At this moment, at the age of 4, she is crawling in her own funny way and when watching television can do so while standing, shaky but on her own. She still needs stimulation and a lot of challenge for her to move from A to B, but it takes her less and less time to make the first move. And one day, a few months ago, I found out as she was standing up with me holding my hands under her armpits and her favourite toy 10 meters away in the same room, she suddenly put one foot ahead of the other!!! The way she ‘walks’ in that way reminds us a bit of John Cleese in Fawlty Towers, but we were so thrilled that apparently there was some kind of walking-mechanism in her system! Since then I really believe she will walk one day, even if it’s going to take her another few years.

Another very good thing is that her epilepsy is under control. She started having seizures at the age of 2 and they were terrifying, but rather quickly the neurologist found the right combination and doses of medicine to give her. She hasn’t had one since February 2005, so we’re very happy with that.

Besides all these symptoms and features, the most important thing to mention is that she’s overall a very happy and satisfied child. She’s easy to please and distract if necessary. Playing and at the moment reading books is what she likes to do most, but she also loves to listen to music and watch TV. For the last few weeks going outdoors is a bit difficult since she seems to get very upset real quickly by mopeds, loud and unexpected noises and little children.  (as she did when she was a baby too) Which is strange, since these last two things, loud noises and little children, are her favourite things at the special day-care. I sometimes suspect her to just realize that going out means not being inside surrounded by her toys…..w/could she be that smart? Anyway, I hope very much that it is yet another phase she has to go through and which will pass, because we don’t get out very much at the moment.

Tess attends a special day-care-centre for 3 days a week, and a ‘regular’ day-care at Wednesdays. She is doing great there. She is so busy all day looking around her, keeping in sight all the other children, experiencing and learning that she hardly takes any time to smile or show many of the things she is able to do at home. Luckily we know that she can, but preferably in a quiet, comforting and known surrounding. Since a few weeks she actually makes some crawling-movements towards me when I pick her up after ‘school’! Soooo happy…

This story is getting to long. If anyone wants to know more, don’t hesitate to e-mail me. I’ll leave it at this, knowing that you now have some idea of what our Tess is like. 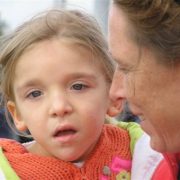 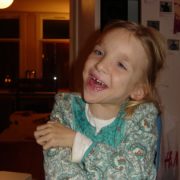 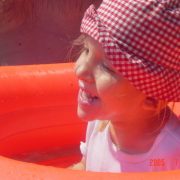 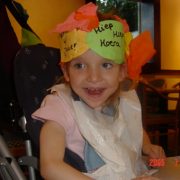 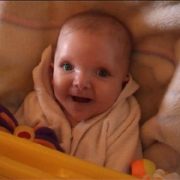 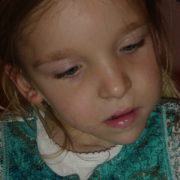 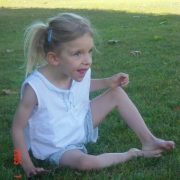 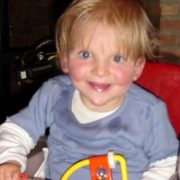 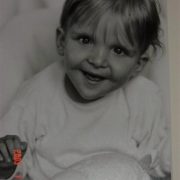