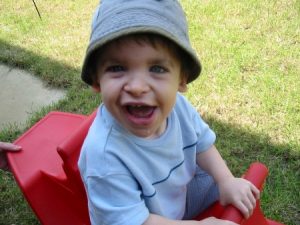 Theo was born on 12 September 2003 by normal delivery at Leeds General Infirmary following a difficult pregnancy. He was diagnosed with MWS at around 6 months by the Dept of Clinical Genetics at the LGI.

A problem with his heart was discovered while Julia was in labour and he was immediately taken to the Special Care Baby Unit. Further investigations over the next few days found Theo was suffering from Agenesis of the Corpus Colosum, Dextroposition of the Heart, Atrial Septal Defect, Patent Ductus Arteriosis, Microcaphaly and Hypospadius. He was also suffering a chest infection.

Despite these bombshells, Theo was allowed home after about 2½ weeks but seemed constantly distressed. It turned out he was intolerant to cow’s milk and Julia had to stop breastfeeding. She found this very upsetting. After a few false starts, a suitable prescription formula milk was found which he still has today.

Theo failed to thrive for some time but now takes calorie supplements to keep his weight up. He is still at the bottom of the centile scale though.

From birth, Theo has been a very poor sleeper. For the first two and a half years we were up with him up to ten times a night so the sleep deprivation was torture, especially when working full time shifts. Now, when he wakes he will not be re-settled and usually ends up in bed with us.

Theo has some deformation to his feet and is waiting to be fitted with calipers to help him. Despite this he can pull himself to standing and has started to cruise, albeit awkwardly, along furniture. He thinks he can walk and often sets off on his own, only to fall in a heap on the floor. We’re very hopeful that he’ll eventually master walking in some fashion. He can crawl at high speeds though.

He cannot talk but can be quite vociferous. He enjoys laughing, shouting and making noises with his mouth.

We are now starting to work on Makaton signing with Theo but we are in the very early stages. He does not seem too interested in signing at the moment but he’s started to indicate when he wants you to help him, so again we’re quite positive about this.

Theo struggles to regulate his temperature and when he is ill often ends up in hospital. His temperature often goes above 40°C. In February this year Theo had a seizure for the first time. It lasted about 40 minutes and he was rushed to hospital. He is not on medication as yet for this so we will see if he has another episode. It may have been a one off due to high temperatures.

We have got through these early stages with a lot of help from our families, especially Julia’s mum who at times practically lives with us looking after Theo.

Theo has two older brothers, Joe who is 15, and Lewis who is 5, and a sister, Talisa, who is 13. They all adore Theo and he is always the centre of attention, which he loves. Theo has a lovely disposition and the most fantastic smile. He loves being around other children and recently started nursery. He seems to be benefiting from this already and is loved by all his classmates.

He is obsessed with door banging, chasing our long suffering cat, throwing things, and the washing machine. He loves rough and tumble and likes to bang on anything or anyone with his hands or feet, or any other object he can get hold of. He bites himself and others when he is excited and basically chews anything he gets his hands on. Our dressing table is looking in need of restoration, due to Theo’s teeth mark being the whole way along it.

All in all, although he is very hard work, Theo is an absolute pleasure and a joy to us all and we are looking forward to his achievements in the future. 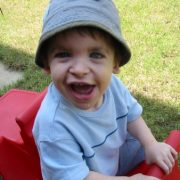 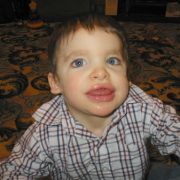