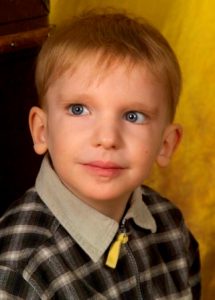 Our son Tobias also has MWS.
He was born on 09-27-2000, so he is only some days older than Chase. Tobi is
our first child and we didn’t know, that he would be handicapped, because the
pregnancy was very good and there were no indications for a disease. Only a
damming up of the right kidney was diagnosed in week 36 of pregnancy by
ultrasound. Tobi was born in week 40. One day after birth he was transferred
to a pediatric clinic, where he was checked for 3 weeks. Then we could take him
home without any results. We only learned that he has the problem above
mentioned with his kidney, a pulmonic stenosis, which isn’t very difficult,
and we had to check again by ultrasound his head / brain. But this was also
not very grave.

Even though we’ve been making physiotherapy since the age of 2 months Tobi
didn’t develop as well as normal child, he didn’t raise his head, couldn’t
sit, didn’t hold anything in his hands and first we thought he couldn’t see,
because he didn’t fix anything. At the age of 6 months we went back to the
clinic to check everything again, eyes, ears, heart, kidneys. It was
noticeable, that Tobi didn’t have regular bowel movement. But till that
clinical stay nobody took that seriously. They took a biopsy and some days
later Morbus Hirschsprung was diagnosed. Tobi could not crap without an enema
and so they decided in June 2001 to remote a piece of his colon. But after
the operation Tobi didn’t recover and some days later his situation was very
critical because of ileus , so they had to give Tobi a colostomy. After that
Tobi developed a little bit better, but he couldn’t crawl, couldn’t sit
independently, couldn’t walk and his mental abilities are very minor.

But Tobi’s sphincter was spastic and it would be not very effective to
transfer back the colostomy, cause we would have the same problems. Our
surgeon read an article in a medical magazine, where a patient had the same
problems with his sphincter and they injected Botulinum Toxin into it. So we
tried the same, 2 times in an interval of 4 months and it was very
successful. In April 2002 they could transfer back the colostomy without any
problems. Now Tobi can crap regularly and without any help. That was a great
relief to all of us.

From his birth on Tobi was regularly checked by a human genetic scientist.
Soon she supposed Tobi to have MWS and a lab-examination confirmed that
supposition in autumn 2001. For us it was a relief to know the reasons for
Tobi’s diseases but at the same time it was a shock to learn all the
symptoms of the syndrome.

Since September 2002 Tobi goes to a kindergarten (preschool) for the support
of handicapped children and he has made progress in many areas. He gets all
his therapies there (physiotherapy according to Vojta  andBobath ,
ergotherapy  and an individual support by the therapeutic teachers of the
institution). But he doesn’t hold things in his hands for a longer time, he
can’t eat and drink alone and he doesn’t speak because he can’t comprehend
very well the things we’re telling him. He can walk on one hand, and also
some steps alone, but very anxious, but he is very safe in crawling. Tobi is
also riding the bus to and from kindergarten by himself and, the first
time he had the same problems like Chase with the noise, they often
had to go to another room with Tobi, when the children e. g. were singing
together. But now it is much better and he loves his friends and they love
him (there are only 6 or 7 children in one group with 2 teachers). Tobi’s
social behavior has changed completely since he’s going to this
kindergarten.

Tobi has had seizures since the age of 1 ½ years and now he get daily medication
for epilepsy (since January 2004). Since then he had only one seizure, I
think because there was an under dose of his medicine, because he has grown
and put on weight. Now he gets a higher dose and I hope he won’t get
seizures in the next time. They mostly appeared while fever was increasing
at the beginning of infections.

Since February 2004 Tobi has a little brother, Jonas. Jonas is very healthy
and happy and meanwhile Tobi likes his brother. First he was very jealous,
but now the boys are playing and crawling together and they like to scream very
loud in the same way. Only sometimes Tobi is hitting Jonas, but he doesn’t
really understand, what he’s doing. Tobi is a very happy child and he loves
to snuggle, he loves to throw away everything he can get in his hand and to
remove things from boxes and closets. Everybody just loves him.

I hope this was interesting for you, I think I forgot many things but if you
have any questions please don’t hesitate to contact me. 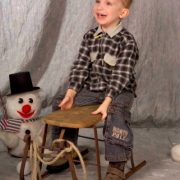 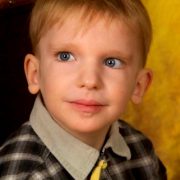 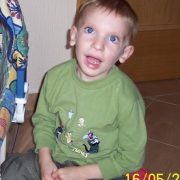 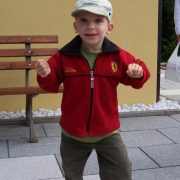 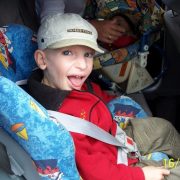 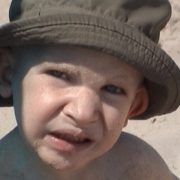